Designed by Canadians for Canadians, this special tour pays tribute to all who have served their country

in the Great War and World War II.

Also applies to the optional tour extension to London!

Make 2018 the year you honour Canada's role in WW1 and WW2 on the battlefields where they fought and fell. 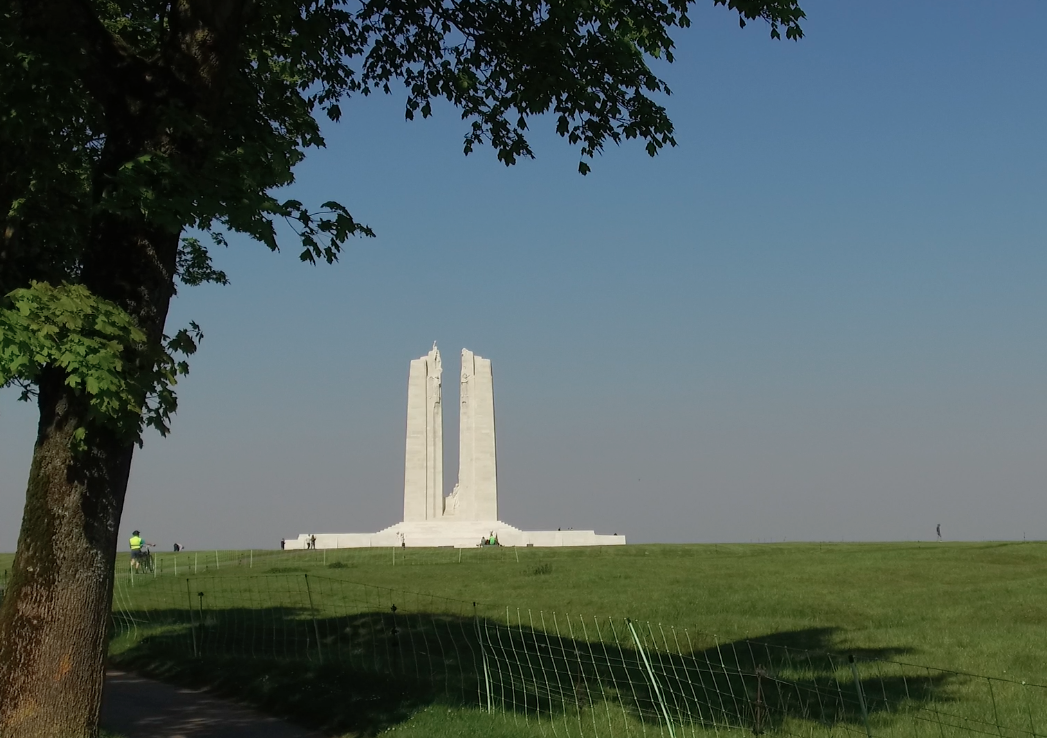 10-DAY TOUR: Take in the museums, memorials and special sites throughout France and Belgium that commemorate the contribution of Canadian soldiers during these two wars, including: the impressive and inspiring Canadian National Vimy Memorial at Vimy Ridge, the Canadian Cemeteries in Bény-sur-Mer and Dieppe, as well as the Newfoundland Memorial Park at Beaumont Hamel. Other destinations visited include the Landing Beaches of Normandy, the Juno Beach Memorial Centre & Park, Amiens and Ypres in Belgium.  PRICES START AT $3,669

In Paris board the high-speed Eurostar train to London for a 3-night stay, plenty of time at leisure, and guided sightseeing, including all the famous landmarks. All services in London, including Local Host assistance, are provided by Monograms. Great Canadian War Memorial Tour with London: 13 Day Tour from Paris to London; PRICES START AT $4,746

Welcome dinner with wine at a local restaurant ascend the Eiffel Tower; guided sightseeing including Dome des Invalides and the Military Museum

Visit the Canadian Cemetery; and the Jubilee Center

Visit the cathedral and memorial to Allied Forces

Visit the WWI site and memorial; walk along the trenches and tunnels; visit the Interpretive Centre and Cabaret-Rouge British Cemetery

Headsets throughout the tour

Inside visits and special features are shown in UPPERCASE in the tour description, including admission charges where applicable.

The day is free to rest or to start exploring the splendid French capital. At 5:30 pm, meet your Tour Director and traveling companions and enjoy a welcome dinner with wine at one of Paris' lively restaurants. Then, take the elevator to the second floor of the EIFFEL TOWER to get a first impression of the "City of Light."

This morning an optional excursion is available to the impressive Palace and Gardens of Versailles, built by the “Sun King,” Louis XIV. Afternoon sightseeing with a Local Guide features the city's major highlights: the Arc de Triomphe, Champs-Elysées, Concorde, Madeleine, Opéra, and Louvre. Visit Napoleon’s Tomb inside the DOME DES INVALIDES and the MILITARY MUSEUM. This evening, an optional dinner and show at a famous Parisian cabaret is available.

Depart the bustle of Paris and head northwest toward the coast.Stop in Giverny and visit Claude Monet’s HOME and stunning GARDENS, the true inspiration behind many of his masterpieces. Next, visit ARDENNE ABBEY SITE on the outskirts of Caen, where Canadian soldiers were illegally executed by members of the 12th SS Panzer Division Hitlerjugend (Hitler Youth) in June 1944. Arrive in Caen, where an orientation drive includes views of Caen Castle, St. Étienne Cathedral and the Town Hall, the former Men’s Abbey.

As site of the World War II Battle for Caen, from June to August 1944, the city saw heavy fighting and suffered major destruction. This morning is devoted to visiting the poignant MEMORIAL MUSEUM FOR PEACE with its exhibits and audiovisual presentation that tell the story of the pivotal Battle of Normandy. Afterward, drive to the Bény-sur-Mer CANADIAN WAR CEMETERY. Surrounded by peaceful groves of pine and maple trees, the cemetery contains 2,049 headstones that mark the dead of the Canadian 3rd Division and 15 airmen. Next visit the JUNO BEACH MEMORIAL CENTRE & PARK. It was on nearby Juno Beach that on June 6th, 1944, Canadian forces landed and secured the bridgehead for a successful opening of the Western Front. The centre educates visitors about Canada's military and civilian contribution during the war. Also stop for pictures at the Canadian House at Bernieres-sur-Mer. Pass the Gold Beach Mulberry Harbour at Arromanches–one of two artificial harbors built by the Allied troops for the D-Day invasion and one of the greatest engineering feats of World War II. Back to Caen.

Take pictures of the famous Pegasus Bridge – secured by the British on the night of June 5th, 1944, and crucial for the success of the Normandy landing and further operations. At Honfleur, from where Samuel de Champlain left France in 1603 to become the founder of the Province of Québec, cross the Normandy Bridge, spanning the Seine River at its mouth and linking Honfleur to Le Havre. Continue East to Dieppe and see the CANADIAN CEMETERY MEMORIAL, and the actual beach battle site to pay tribute to 913 Canadian soldiers who died that tragic morning of August 19th, 1942. Lessons learned here were instrumental in the successful landing two years later on the beaches of Normandy. On September 1st, 1944, the 2nd Canadian Infantry Division liberated Dieppe.

Before leaving Dieppe visit the JUBILEE CENTER. Later arrive in Amiens and visit medieval AMIENS CATHEDRAL and the Memorial to Allied Forces, which commemorates the men who fought one of the decisive battles in August 1918, ultimately leading to the end of World War I. Then, visit the NEWFOUNDLAND MEMORIAL PARK in Beaumont-Hamel, dedicated to the Dominion of Newfoundland forces members who were killed in WWI. The attack that tragic morning of July 1st, 1916, claimed 91% of the regiment. The site contains the stunning bronze caribou monument, emblem of the Royal Newfoundland Regiment, the Danger Tree, around which the highest casualty numbers were inflicted and the visitors’ centre.

Today visit VIMY RIDGE, site of an outstanding Canadian victory in World War I. The battle, which began April 9th, 1917, marks the first time all four divisions of the Canadian Expeditionary Force participated in the battle together, and has since become the symbol of the Canadian nationalistic achievement and sacrifice. Visit the newly restored MEMORIAL that dominates the area. Around its base are the names of 11,000 missing Canadians who died in France during the Great War and have no known graves. Time to walk along the restored trenches and tunnels (subject to availability) and to visit the INTERPRETIVE CENTRE. End with a visit to the CABARET-ROUGE BRITISH CEMETERY, from where the remains of an unknown Canadian soldier were returned home in 2000 as a symbol of all the missing and unknown soldiers who died during the Great War in Europe. Continue to Ypres. Later your Tour Director will accompany you to Menin Gate. Here, the “Last Post” is played every evening to honour the memory and sacrifice of the war’s dead.

Visit famous CLOTH HALL and its IN FLANDERS FIELDS MUSEUM. Afterwards, stop at the ESSEX FARM CEMETERY, where John McCrae wrote his poem in May 1915. On to Passchendaele, where a Local Guide will tell you the story of the tragic battle that took place here in 1917. Up the hill at Crest Farm is the PASSCHENDAELE CANADIAN MEMORIAL, which marks the place where the men of the Canadian Corps took possession of the high ground at Crest Farm after two weeks of ferocious fighting. Also stop at TYNE COT CEMETERY, the largest Commonwealth military graveyard in the world with its 12,000 graves and a memorial dedicated to another 35,000 missing.

Return to Paris. Choose from our exciting optional excursions: the famous Louvre Museum with the Mona Lisa, and a scenic cruise on the beautiful Seine River, followed by a visit to the artists’ hill of Montmartre.

Your vacation ends with breakfast this morning.

Travel by high-speed EUROSTAR TRAIN to London. Your Local Host is available to help you make the most of your stay.

Free time to perhaps visit the Imperial War Museum or the Churchill War Rooms. Ask your Local Host for details.

Your vacation ends with breakfast this morning.

Applies to individuals within groups who book within the promo window.

Disclaimer: *Book and deposit on the July 7, 2018 departure of the Globus Great Canadian War Memorial Tour (RY) and save $175 per person off the land price. Must mention Ask & Receive Code RY175. Must be booked, under deposit and discount applied between May 9 and June 9, 2018 for travel in 2018. Offer is combinable with any other mass promotion currently running. Applies to new 2018 bookings only and offer will not be applied to pre-existing bookings. Applicable to individuals added to groups within the promo window. Offer reliant on space availability. Full cancellation penalties will apply. Additional restrictions may apply.

Terms, conditions and restrictions apply; pricing, availability, and other details subject to change and/ or apply to US or Canadian residents. Please confirm details and booking information with your travel advisor.